Haircare is the category that’s most likely to let me down, beauty-wise. It tends to give me heated tools that I can’t manage to operate, “moisturising” shampoos that leave my hair feeling like wire, styling foams and mists and mousses that need to be blow-dried in by someone who can actually blow-dry hair, which most definitely isn’t me…

So when I find hair products that work well for me I feel almost jubilant about it and also feel the need to shout the product names from the rooftops. Luckily I have a blog so I don’t actually need to get onto the rooftops, I can just shout about the products here. 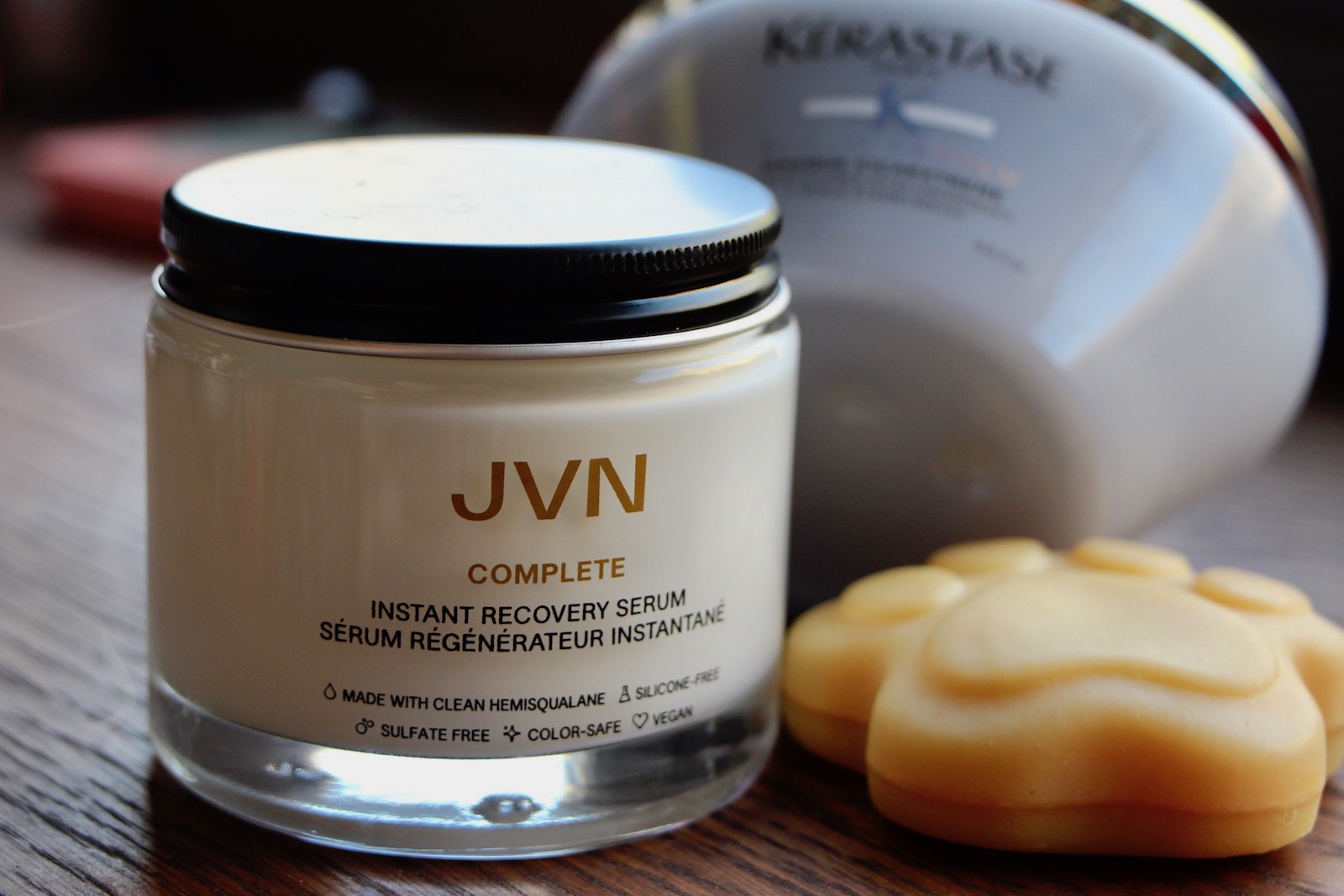 (My village would absolutely hate me if I started shouting from the rooftops. We already have incredibly noisy owls here and a weird animal that sounds like a dragon that breathes out raspy, massive breaths across the valley all through the night  – I’m convinced it’s some sort of top secret military project – and so we don’t need me adding to the wild nighttime soundtrack.)

The first of these wonder new hair product discoveries is the Kerastase Blond Absolu Masque Cicaextreme. This is actually a rediscovery and by God, what a stroke of luck that I delved in again. It’s absolutely magnificent on bleached, fried hair. I knew from the second I began rinsing out that this was special; my hair didn’t even feel like hair. It was both weightless and slippery, it felt as though it might just slide off my head and down the plughole with the water.

I used it again and again – and again just to check – that it was indeed this masque making miracles on my head and yes. This was no one-shot wonder. My hair had that expensive weighty feel that I’ve always tried to explain at the hairdressers but people look at me like I’m mad; I don’t want soft hair, I don’t want greasy hair, I want it to have the weight and smoothness of silk. I want it to drape and slide over the back of my hand like a hair advert.

And I didn’t just take my own word for it either; I did a number of jobs and events where the respective hair stylist commented on the condition of my hair – I’d like to say they were wowed, but they just commented. Let’s not overegg the pudding here.

I don’t even leave this on as a mask; shamefully I plonk it on, massage in and rinse off all within a few minutes. If I left it on then my hair would no doubt win some sort of award, or be put forward for scientific research.

You can find Kerastase Blond Absolu Masque CicaExtreme at Amazon here* (currently almost a tenner off) and LookFantastic here*. It’s a pricey little morsel so here’s my recommendation: squeeze as much water from your hair as you can after shampooing. Almost towel dry it a bit. Then the product won’t just slip off, it’ll actually stick to your hair and you can use less and massage it in more. Leave on for as long as you can, even overnight – or, if you’re me, for two minutes, then rinse.

Next on the honours list; JVN Instant Recovery Serum. Now I know a lot has been said about the Air Dry Cream but I find that a little too robust on my very fine hair. It just weighs a little heavy on the ends and never quite seems to disappear on in. The serum is like a lighter, more repairing version – it feels like (and is) a treatment rather than a styling product. You don’t get so much in the way of “texture” but you do get a smooth finish with no grease or residue.

The jar packaging isn’t ideal for me when it comes to application as I rarely want to dollop my fingers into something messy when I’m in the final stages of my glamourising but I’ll forgive it.

You can get this in two sizes at Space NK* – the bigger one is much better value and, at £25, isn’t so bad considering you’ll be hard pushed to get through it in a year.

And to the finale and a star buy for the kids: Garnier’s Apricot No Tears Easy Detangling Solid Shampoo Bar. No packaging save for a simple cardboard box, the bar is shaped like a lion’s paw (it’s Lion King themed, they’ve thought of everything!) and you just lather it in your hands (or directly on their hair) and it instantly produces a mass of shampoo.

I thought that this would be a horror show; I was almost going to hide it because I knew the kids would want to use it if it was shaped like a paw and I couldn’t bear the idea of having to comb out the resulting bird’s nest of wiry, dried-out hair. But – hurrah! No dryness. This did what it said it would; detangled and shampooed. I don’t know what else to say about it, I was just very pleasantly surprised.

If you’re trying to cut down on unnecessary packaging and want to keep things simple with the kids’ hair-washing routine then this is great.

You can find it at Boots here* – it’s £7.99 and so far multiple uses have not even remotely made a dent in the size of the paw, so I expect it to far outlast a bottle. Do you think? I’ve just written that with no way of knowing. I’ll update you. Maybe it’ll be neck and neck.

The post These New Haircare Discoveries are Brilliant appeared first on Ruth Crilly.