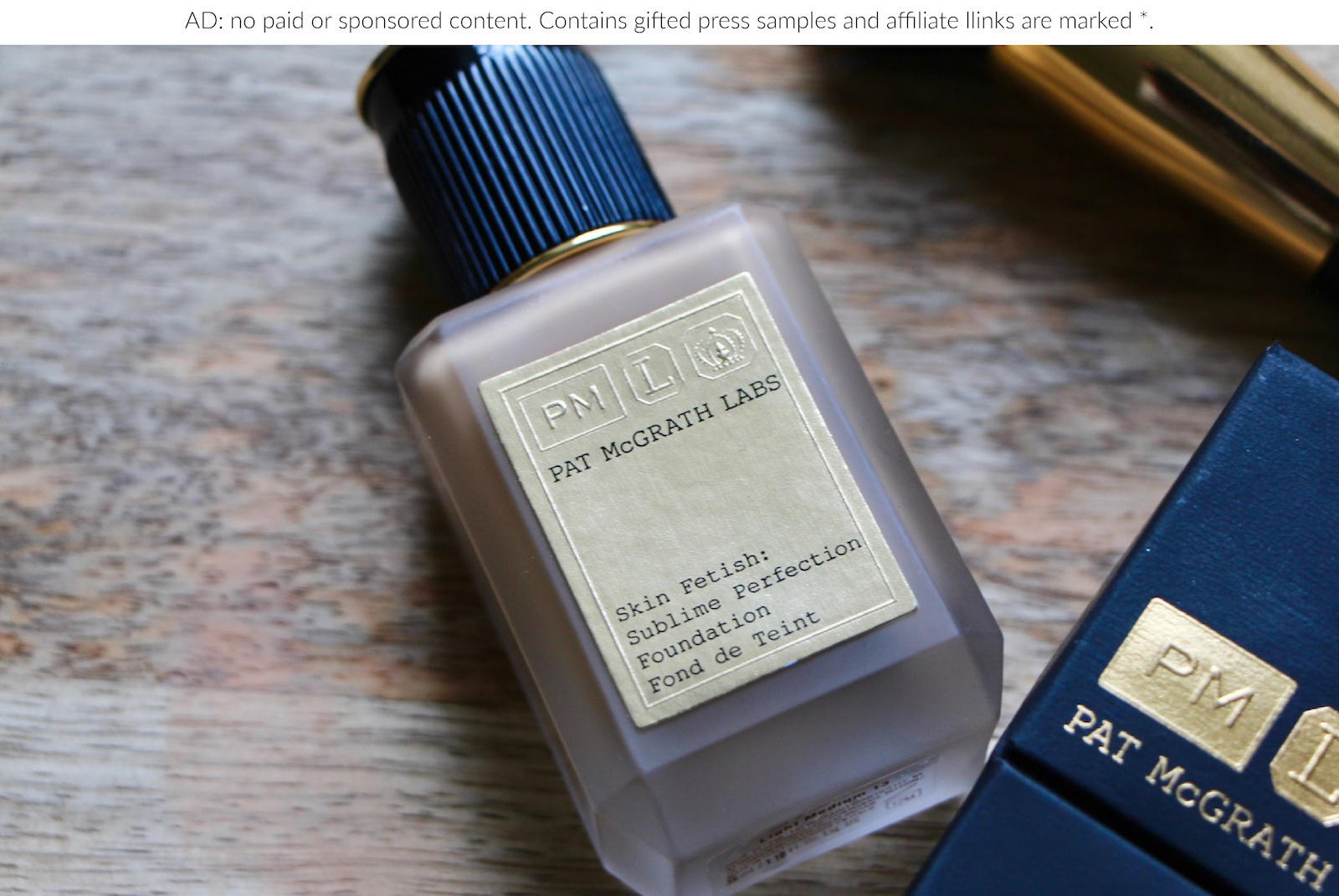 I don’t think I’ve ever had so many questions and comments about a foundation as I have about the Pat McGrath Labs Skin Fetish Sublime Perfection. I photographed myself oh-so-casually wearing it on Instagram stories and it has made background appearances in some of my videos; each time I’ve mentioned it I’ve been inundated with DMs about how long it lasts, how good the coverage is and which shade I wear.

And so here’s a proper, in-depth review. I’ll start out with the same warning regarding the price that I gave on Instagram: it’s £60 in the UK. Incredibly pricey, but I have to say that very few people I spoke to seemed perturbed by this quite considerable financial outlay. Surprisingly. Which makes me think that Pat McGrath and her marketing team have done an epic job of carving out a niche in the highest end of the cosmetics market – if you can establish yourself to the point where beauty-aficionados don’t flinch too much at a sixty quid face base then I’d say you’re doing pretty well!

The brand showcases clever formulations in luxurious packaging and is most definitely powered by Pat’s reputation as one of the world’s most successful and inventive makeup artists. I’d say that the Sublime Perfection foundation is one of the hero products, but then I’m really into “skin looking like skin” and so I’m possibly biased.

But Sublime Perfection is more than your standard kind of “real skin” foundation – it has a few tricks up its proverbial sleeve that I think sets it apart from the rest when it comes to achieving the holy grail of makeup – a flawless finish that still looks believable. It has the sort of finish that looks supple, dewy, bouncy and fresh yet still manages to blur imperfections and create a perfect canvas, but there are some very notable bonuses, which I’m going to come to after another disclaimer.

I have good skin.

I say this not to brag, but to be helpful, because a foundation that I love, that makes my skin look visibly perfected and dewy, might not feel so magical if you have blemishes that need a full coverage to be concealed. This Skin Fetish Sublime Perfection potion is sheer. Yes it’s buildable, as I’m about to delve into in more detail, but the medium coverage is almost a perceived medium – as in minor imperfections are cleverly blurred and veiled – rather than the solid coverage you might get traditionally.

So, the notable bonuses – what sets Sublime Perfection foundation apart from the rest?

Well as I said, it’s buildable. And I mean properly buildable, not just “let’s see what happens if I tap a bit more under the eyes because I can’t be bothered to look for my concealer” buildable. You can go from sheerest sheer, which Sublime Perfection handles impeccably because the formula is so hydrating, right up to a medium-ish coverage.

Now loads of foundations are buildable; the difference with this one is that it retains its freshness and increases its sheen as the coverage builds. Which is quite a feat. Usually the more you apply, the more you start to look a little flat, but here we have a coverage that is comprehensive but a finish that is expensive, glowing and bouncy with the same feeling of sheerness as with a light application.

You never get a blanket, opaque coverage, so full coverage-hunters will be disappointed; it’s almost as though the pigment is suspended in a kind of pliable, flexible sheen, so the more you build the more sheenier it gets.

Pat McGrath calls this a “customised couture finish” and I really couldn’t think of a more apt description; it’s the classy, non-obliterating type of finish that you get in a Vogue editorial or at a Paris show. It’s about good skin and not creating a mask. It screams expensive – the blurring particles that give an almost soft focus effect, the “lit from within” glow. But then I do think that the finish somewhat also pivots on the user having relatively blemish-free skin, too.

The most surprising thing about this foundation, though? It’s longwear! Name me a dewy, lighter-than-light base with the texture and comfort of a tinted moisturiser but the elegance of a high-end, finely-formulated foundation that lasts for the whole day? I’ll wait.

Estée Lauder’s Futurist comes pretty close, with its plumpy-bouncy texture and ultra-hydrating finish (review here), but it’s not quite on the same level in terms of refined coverage and glow. Zoom right in on the Sublime Perfection –

– and it’s genuinely almost undetectable on the skin, whereas the Futurist has a slightly more visible dewiness. In terms of hydrating finish, they are on a par, but the Sublime Perfection has been specifically designed to be buildable and tweakable to your exact coverage desires, whereas you wouldn’t want to go silly overboard with layering up the Futurist because it’s so moisturising – you’d just go for a higher coverage foundation.

I have to say though that the Pat McGrath base, even at its sheerest, gives such a heady dose of soft-focus glow that you rarely need to build it up unless you’re going “out out”. I hate the phrase “a little goes a long way” but this really does, especially if you apply with fingertips as you would skincare, rather than a brush.

Here are the before and after photos, although I think that moving film captures the glow best. In fact I almost wish I didn’t have to post the comparison pictures, because it’s in real life and when the light is moving that the skin really comes alive! Nevertheless here we are:

There’s no dramatic total-wipeout of the facial features, but the overall skintone is more even, more glowing whilst retaining the nuances of real skin.

You can probably tell that I like this foundation a lot, even with its couture price-tag. Many would want a better return on investment – a more dramatic transformation – but for those who seek the ultimate “my skin but better” finish, it’s a viable option. It comes in a whopping 36 shades with different undertones well catered for and it’s suitable for any skin type. Though you might want a spot of primer beneath it on oily parts of your face, if you get them. After a full (hot) day I might get some minor slippage on my nose, but at certain times of the month my nose becomes a grease factory and so that’s really splitting hairs.

Apply after moisturiser and/or sunscreen (Sublime Perfection doesn’t contain any, which I kind of like because if I’m out then I always have a standalone SPF on underneath anyway) and use fingertips to sheer out and blend or a brush to build up slightly heavier coverage. I wear a mix of shade 13 and 8 (those were the samples sent out, I didn’t go drunk shopping!) with about two parts 8 to one part 13. So I reckon I would be a 10 or 11 if I actually went out IRL and got matched at a counter.

You can find the full Pat McGrath Labs range at Selfridges on the brand website. The Skin Fetish Sublime Perfection foundation is £60 at Selfridges here*.

If you like that fresh glow  effect then take a look at Clinique’s Even Better Glow here or the aforementioned Estée Lauder Futurist foundation, review here.