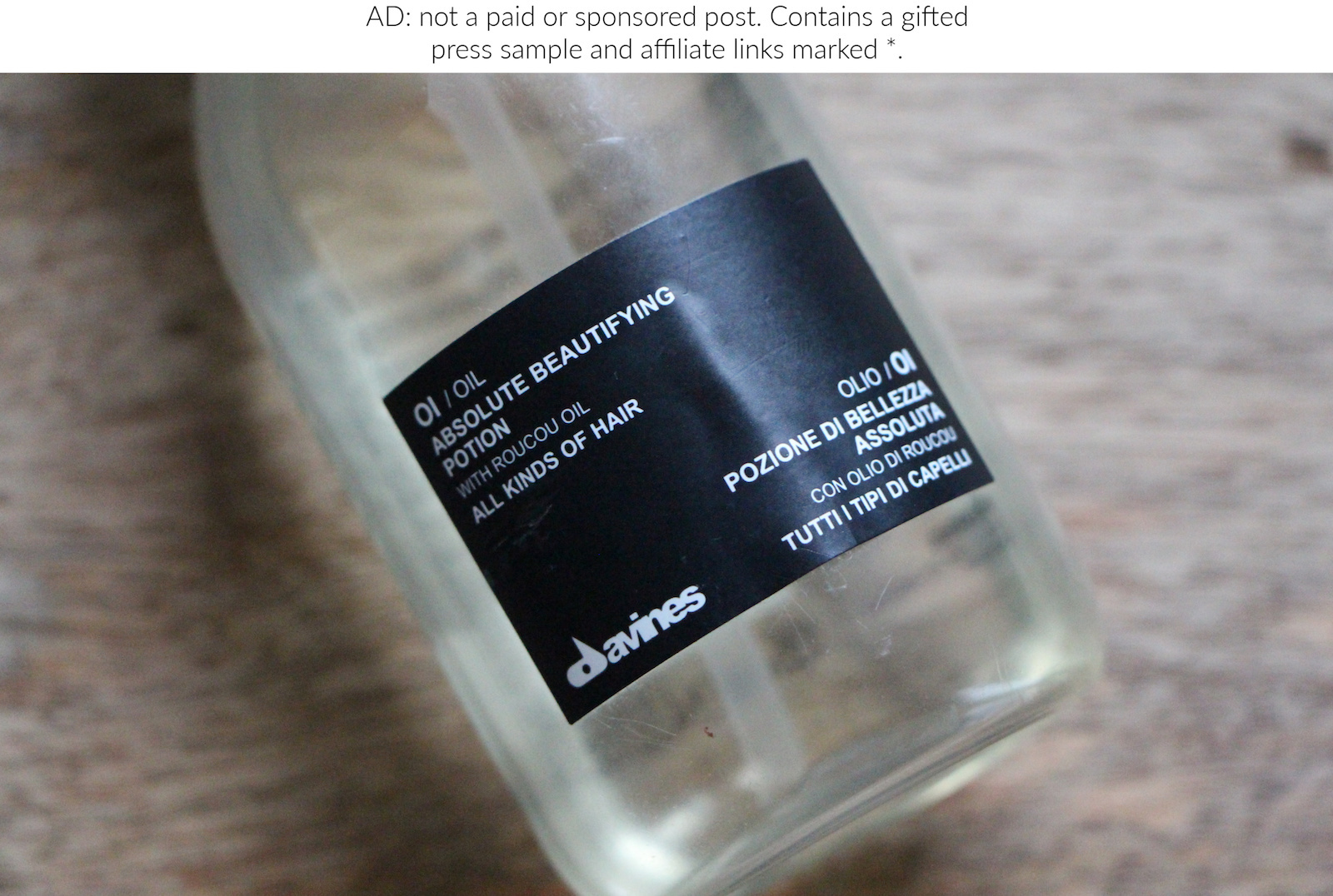 I always feel like a right berk recommending this to people when I can’t pronounce the name properly – I mean, how on earth do you say OI Oil without looking as though you’re doing an extreme facial yoga move? – but recommend it I do. A lot. Because, despite trying dozens and dozens of smoothing creams and silkening serums and pomades that promise to tame fried locks, this is still one of the very best things I’ve found.

I’m not 100% sure on how to say the Davines bit, don’t have a clue on the OI bit, but don’t let pronunciation faze you: because surely that’s one of the great things about internet shopping? Being able to order stuff that you can’t pronounce in real life. Or, even better, being able to order all of the stuff that is too humiliating to do face to face.

(The fact that I now can’t think of a single thing that would humiliate me to buy face-to-face means that I have sunk to new lows. Unctions for various complaints of the orifices, athlete’s foot cream, stuff for ulcers and boils, bunions and buboes; the pharmacist in my local Sainsbury’s has seen it all and neither of us bats an eyelid. I always wonder whether it’s the combination of shopping items that cause’s embarrassment, rather than the items themselves. Though to be quite honest I rarely overthink this nowadays. I mean, if you found yourself at the checkout with a cucumber, some lard and a packet of condoms then you’d probably want to rethink your shopping list but I can’t think of much else that would make me pause for thought. Just to be clear, I’ve never rocked up to the tills with that combination of items, but once I did buy just an aubergine, two courgettes and a large pot of yoghurt because I was making an emergency vegetarian curry for a visiting friend and the man at the checkout said “that looks like a fine Saturday night in.” WTF.)

Where am I going with this? I have no idea. Poor you, clicking on a seemingly innocent haircare review and being plunged into the depths of my meandering mind. OI Oil. No idea how to say it, because they’ve capitalised the O and the I which further confuses me – if it’s not “Oi Oil” then is it o-eye oil?

But I’m guessing that would be off-brand. Davines is a very high-end, high-performance haircare brand and I’m not sure that Harry would be their poster boy. Everything I’ve tried from this company has been gorgeous, effective and a cut above much of the competition, so I’m going to be sensible from now on and give it the credit it deserves.

OI Oil Absolute Beatifying Potion is a hair-finishing serum that contains oil, but doesn’t quite behave like an oil. Which is a blessing for those with fine, easily-weighed-down hair. You get all of the sheen and conditioning benefits of the oil (roucou oil, which is apparently 100 times richer in beta carotene than carrots; handy if you, like me, would like your hair to be able to see in the dark) but you don’t get the greasiness.

Obviously if you pour the stuff on and baste your whole head in it, things would start to get greasy, but why would you do that? You need a minimal amount – for long hair, I’d dispense about the size of a 10p coin – and that minimal amount manages to groom, tame and polish without any heaviness whatsoever.

My hair just looks sleek and smooth, but not in that nineties Jennifer Aniston way that needed four hours of straightening to achieve – the surface just looks healthy and…well pulled together. So I’d use the OI Oil on days when my hair looks tousled, for example, leaving it looking tousled but incredibly healthy, rather than tousled because it’s just dry AF and I haven’t had my split ends cut off in five or six months.

How do you use Davines OI Oil? Well here’s the most beautiful bit: pretty much in any way you want. Massage into damp hair and allow to air-dry, massage into damp hair before blow-drying, smooth over dried ends to get rid of frizz or spread a small amount between palms and then press them lightly down the lengths of a finished style to give it polish and sheen.

My most-employed way of using OI Oil is on hair that I’ve basically washed and forgotten about, hair that has dried into a huge Helena Bonham-Carter bird’s nest on my head, tangled and stressed. And you know that when you’ve left your hair to riot like that then there’s very little you can do to pull it back from the brink – some of my lowest hair moments have been when I’ve brushed my hair out from the freshly-washed bird’s nest and it just sits, lank yet somehow still frazzled, hanging down in tattered curtains on either side of my face.

That is when OI Oil comes into its own. On my fine, colour-treated hair it just seems to perform small miracles, working its way through the damage to come out with something that’s a hell of a lot more than just presentable. And yes, a glance at the ingredients list tells you that the silicone-heavy formula is very much in a similar arena to your Frizz-Eases and your Moroccanoils, but there’s something about this one that works incredibly well on my fine, blonded hair.

You can find Davines OI Oil online here* – a small bottle is £24, but a large bottle, which is almost three times the size, is £35. On the one hand, a small bottle would probably last you an age and I’m always hesitant to recommend unnecessary super-sizing, but the numbers here point in only one direction. Economy of scale and all that.

Best of 2019: My Skincare and Haircare Favourites

Here are my 2019 favourites for skincare and haircare, including the latest shampoo discovery that actually changes the entire feel of my hair and the skincare that’ll make a proper difference to your beauty routine.

I was going to do a bodycare version of this 2019 roundup, as well as a “best books” video, but I’ve left it too late and all of a sudden the whole “best of last year” thing seems very outdated. It’s the video equivalent of being that person who’s still saying Happy New Year! to people they haven’t seen for a while – I mean when do you stop saying it? February? Move on.

I’m listing the products beneath each video pane for ease, but please do give them a click and a watch – the haircare one is particularly brief, which will no doubt make some of you ecstatic with joy.

Elizabeth Arden Great 8 SPF35, is usually £36 but at time of writing it’s £24 on Amazon (legit retailer) here*: https://amzn.to/2NCyNmK find it in most department stores and on FeelUnique here*: http://bit.ly/2NDbMA9

The post Best of 2019: My Skincare and Haircare Favourites appeared first on A Model Recommends.