King Triton: Hot But Not A Fox 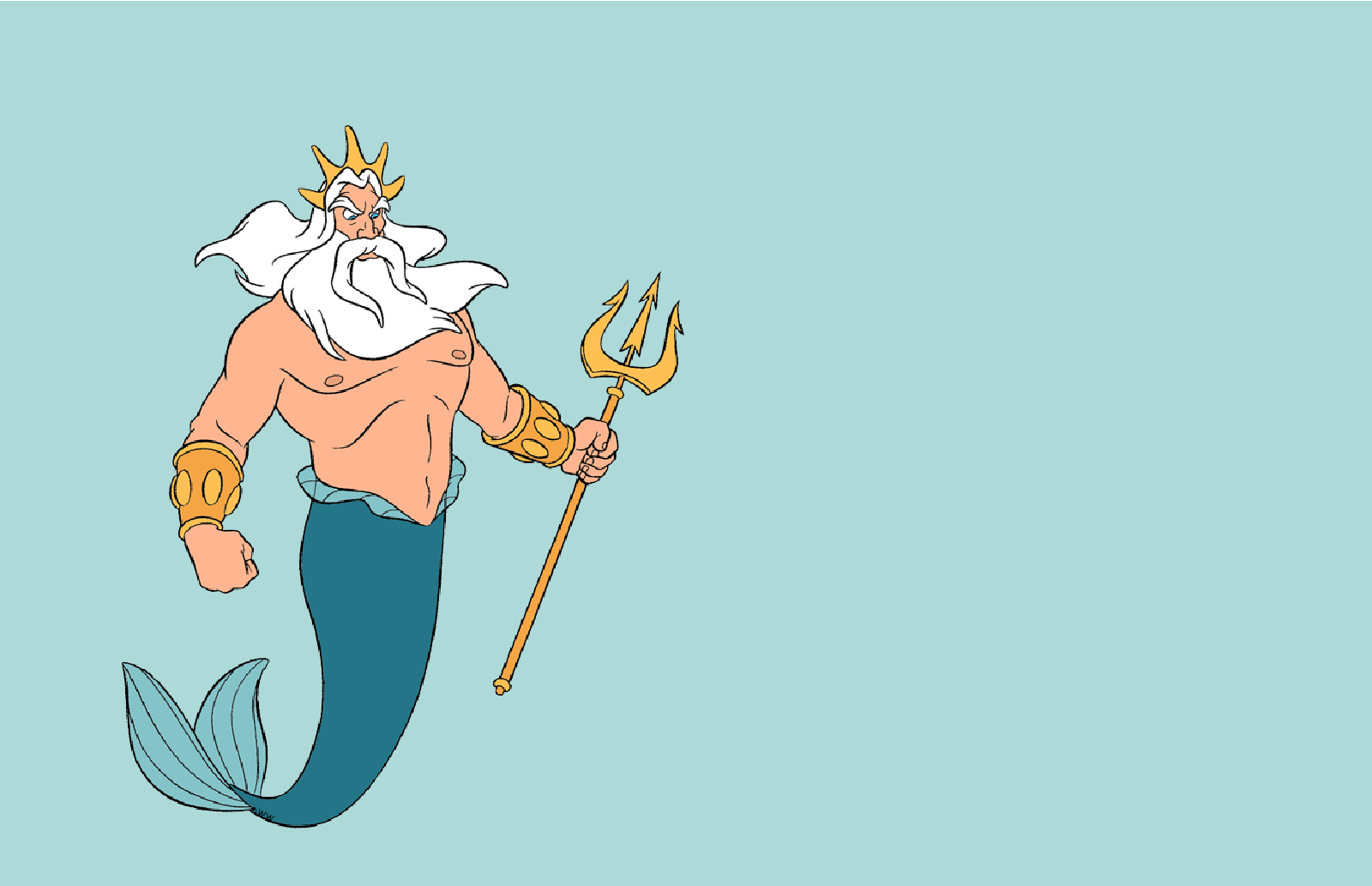 Last week I found myself unexpectedly perving over King Triton’s torso whilst watching The Little Mermaid II with my kids. Which was something of a surprise, even to myself. A cartoon character – who knew? As he waggled his way into shot, I was taken aback by the broadness of his chest, the abs definition, the slenderness of a waist that tantalisingly led the eye down to his thick, smooth…

Is it weird to wonder about sex with a merman, and a cartoon one at that? It feels odd to have (very minor) levels of arousal over someone who’s half fish and I’m annoyed at Disney for putting me in this position in the first place. Why did they have to draw him with the most buff upper body the cartoon world has ever seen? It’s just not on. Don’t make fantastical part-animals sexy is what I say. I never had this hot-under-the-collar problem with Mr Tumnus from Narnia.

Morally it feels a bit off, because surely sex with a half-animal is (trying to follow logic, here) a sort of half bestiality? Or even full bestiality, because really the part you’re “engaging with” most is the non-human part. You can very well kiss King Triton, and King Triton can very well honk your boobs with his human hands (this is how I imagine he shags – all whilst bellowing out a sea shanty), but when it comes down to it, you’re going to be shagging a fish.

I also feel bad because (in The Little Mermaid II) Triton is a white-bearded, protective and loving grandad, and so it’s a bit like fancying Santa. Except Santa with the body of Jason Momoa.

How did King Triton even get that ripped? I can imagine that upper body strength for a merman would have to be phenomenal, because effectively your legs have been replaced with a giant flipper, but still. There’s upper body strength and there’s the torso of a man who’s been lifting articulated lorries for the past ten years. And there ain’t any articulated lorries on the bottom of the ocean, I can tell you that for free.

(Actually there might be. It could have slipped off a sunken freight ship. And I suppose the mermaid community would only need one articulated lorry in their workout area. The MerGym. They could lift oil drums or boulders whilst waiting for the lorry lift, or use the resistance bands. Which would be made from those thick, shiny strips of seaweed.)

(Sorry, I’ve got an image in my head now, of all of the fitness fanatic merpeople hanging about in their outdoor gym, an underwater version of Muscle Beach. They’re all side-eyeing one another and drinking green protein shakes out of conch shells. Although: do merpeople drink? How could you drink liquid when you are quite literally surrounded by liquid? You’d open your mouth and all of the seawater would pour in – how would you selectively imbibe a particular liquid? I suppose you’d just have to use a straw.)

Anyway, sex with King Triton: it would be totally inappropriate. Even on a practical note, things aren’t plain sailing. Where is his willy? Could it be hidden beneath the scales of his tail, like a pop-up surprise? Or do merpeople have no reproductive organs? How do merpeople mate?

Wait. Google is my friend here.

There are a LOT of theories. It’s mindblowing. People do know that mermaids aren’t real…don’t they? Because there seem to be thousands of mer-believers out there. Anyway, the two most popular theories (and I suppose only feasible theories when you think about it) are that the mermaid lays a mer-egg and the merman comes along and basically spunks over it, OR that they mate like a human, with the merman’s penis concealed in a sort of sheath, like a dolphin’s.

I feel queasy, for some reason. I think it’s the idea of being penetrated by a sheathed dolphinesque penis. Would it have scales on the actual shaft? Would the scales feel like sequins? Risky! You’d be absolutely in tatters down there. Unless your own vaginal passage was also scaled, in which case it might be somewhat protected, but then would the scales clash and catch on one another as the penis was withdrawn? What if the sequinned penis became trapped inside the sequinned tunnel? There’d be trouble then!

Do you think there’s an A&E for mermaids? I like to think that Disney would have that all drawn out – the octopus receptionist with her many telephones, the swordfish surgeon with his scalpel nose.

“Ah, King Triton! What can I do for you this time, Your Royal Highness? Sequin penis stuck inside a sequin vagina again? You need to be more careful! Nurse Pufferfish, just roll them over this way, that’s right, easy does it – and fetch the KY jelly!”

Oh, I’ve gone off on a real tangent with this post. I only meant to ask around and see who else thought King Triton was hot. Which, incidentally, I have already done on Instagram but with slightly disappointing results; King Triton was not top of the hot-cartoons charts. Aladdin cropped up quite a bit, and also the general from Mulan, but I think that the most popular cartoon crush was Robin Hood from Disney’s Robin Hood. Who happens to be – get this – a fox!

What is it about anthropomorphised animals? A few people also said “adolescent Simba” from The Lion King, but more people willingly and enthusiastically aired their fancies for the beast from Beauty and the Beast. But only AS the beast, mind; he seems to lose his sex appeal when he becomes human again. Apparently.

Giving it some (extended) thought, the beast is pretty broad across the chest. Nice and stocky. I kind of get the attraction. Moody, damaged, good head of hair, massive castle with full staff including a wardrobe that talks. But Robin Hood the fox? He of the smug smile and overly-confident swagger? Nah, sorry. I’m lost on that one…

The post King Triton: Hot But Not A Fox appeared first on A Model Recommends.