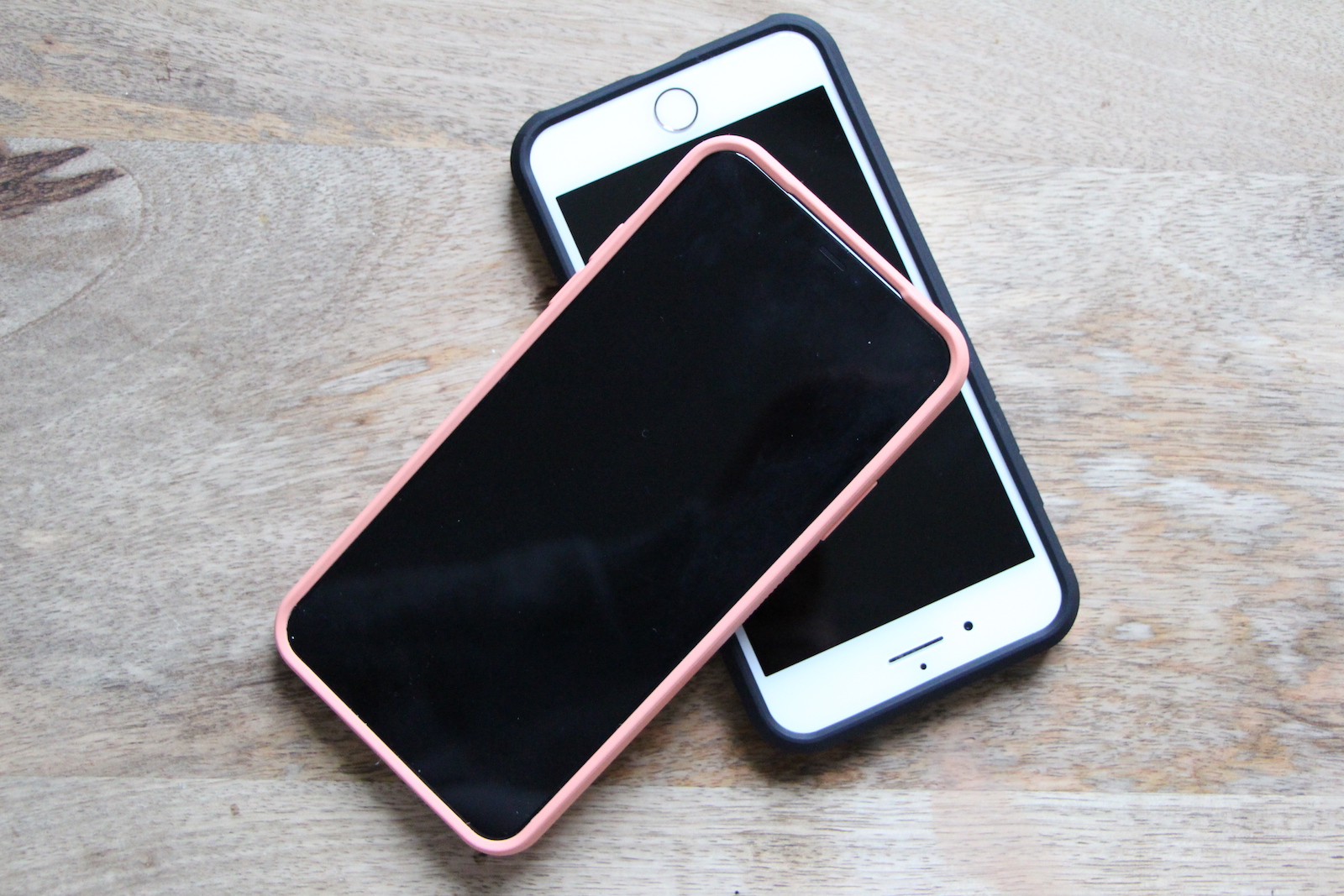 I finally caved in, after over ten years of owning an iPhone, and bought myself a protective case. Why the prolonged hesitation? I’ll tell you why. I genuinely think that most phone cases are horrendous. They’re like the tech version of Crocs. Plasticky, garish monstrosities that just seem to be needlessly bad. Design abominations. And what’s worse is that they take an object of great design beauty, the iPhone – so divine in its apparent simplicity, so streamlined! – and clothe it in fancy dress.

Whether it’s a rectangular neoprene wetsuit affair or some kind of angular, metallic thing that adds four kilos to the total weight of the handset, pretty much all iPhone cases look shite.

But anyway I bought two. (I kept my old phone – see below.) One is all gold and shiny and jagged, like a teen’s drawing of a futuristic supercar, the other is a rubbery coral-toned sheath. A kinky flesh suit for my new iPhone 11 Pro Max, which was a very kind Christmas present from Mr AMR and I had no idea quite how kind until I accidentally stumbled upon the price online whilst looking for phone tripods. It’s the sort of price that warrants full-time security and a driver, or at least one of those briefcases with a chain that you can handcuff to your person.

Anyway, back to the rubbery sheath. It has this funny pop-out thing at the back that looks a bit like a weird nipple; it pulls out with a satisfying thrrrp and helps you to grip the phone, if having a phone almost entirely covered in non-slip material isn’t grippy enough for you. Perhaps your fingers are made of banana skins or the tips produce a constant flow of melted lard. I don’t know. You’d have to be pretty bloody clumsy to not get a grip on a silicon case.

And I look at these cases and think this: why have I spent a fortune buying an iPhone, an object that has surpassed all usual standards of design and function, an absolute tech icon, and then put a case on it that’s so ugly you have to question the designer’s sanity? It’s like throwing a polyester dog blanket over a George Smith sofa, or wrapping a Ferrari FF in sticky back plastic, or clothing Michelangelo’s David in a tracksuit from Boohoo.

But I’ll tell you why I’ve put a case on: because the iPhone is too naked and vulnerable without one. With its glass casing it’s more like a phone foetus than a fully-formed piece of tech – one wrong move, one rushed pants-pull-down to go to the loo when it’s in your back pocket, one child’s clumsy swipe and the whole shebang is game over. Carrying an iPhone about is like being responsible for a Fabergé egg – you’re constantly catching it mid-air, comedy-style, and breathing a sigh of relief when a knock results in “just a small crack in the corner but it doesn’t affect the screen”.

And all of this is the fault of the iPhone designers, who have made what is now our most-used modern-world thing out of the most fragile material they could think of. They may as well have folded it out of origami paper or covered it in the crumbling pages from a 12th century monastic ledger. I just can’t even conceive what was happening in the meeting where they discussed manufacturing.

“OK guys, I am loving this iPhone idea. It’s like a cell phone, but so much more. I mean, I totally see people using this all of the time – like all the time. Not just for calls, but for everything. Schedules. Emails. Taking photos. I want this to be in people’s hands constantly, I want them to carry it with them everywhere. In the car, walking down the sidewalk, at the mall, on a family trip to the ocean…”

“Yeah boss, this is so awesome. It’ll be, like, the accessory. The most-used thing people will ever own. Question is guys, what do we make it from? This piece of expensive tech that the world will carry with them and probably put in their back pocket loads? Let’s put our heads together here guys. Over there in the corner, you there – Sam, what d’you reckon? What should we make the iPhone out of?”

“Awesome Sam. Alright team, let’s go ahead and manufacture in glass. If you could also make it super-slippy to hold, and also create weak points in the screen and casing so that if a spider sneezes it immediately shatters, that would be super-awesome. Let’s go guys, let’s do this!”

I still haven’t gotten used to my sheathed iPhone. Sometimes it takes me surprise and I look at it and think “that phone cannot possibly be mine.” Alas it is. I feel as though I’ve had a horrific hairdye job and I sort of forget about it until I look in the mirror and then, for a few seconds, I have a sense of disbelief. How could I have gone so dreadfully wrong?

But anyway, my iPhone now has the equivalent of a hi-vis hazmat bullet proof wetsuit on and so I’m sure it feels a lot safer. (It ponders upon this as it lies there on its charger-pad bed. The fact that it’s so brilliantly, perfectly formed, yet it needs so much help to survive. “Why did Daddy make me so weak?”)

I bought another case, too, for my old iPhone, the one that I didn’t trade in. WHAT? you may well ask. One always trades in, surely? Not I, friends, not in this case. And do you know why? Yes, the £350 was a massive temptation, but I can tell you a bigger temptation: having a spare phone filled with noisy/educational game apps for the sproglings to play on when I want a moment’s peace. Because do you know what I like to do when I’m having that moment’s peace? I like to play on my phone! There’s nothing more frustrating than sitting down with a cup of tea and a slice of Christmas cake (it’s still going strong, well done Mother) and realising you can’t actually scroll through Instagram or read the news because the very thing giving you a spare five minutes is the thing you need!

Anyway, I bought a case for the games phone (extravagant, but quite honestly there’s no price you can put on sanity, is there?) and good God it’s even uglier than my silicon nipple-backed one. (Nippleback. Could be a Nickelback tribute band!) It’s all angular and weird like Kryton from Red Dwarf.

The oddest thing about it is that it has a porthole cutaway so that the apple symbol can still be seen. Oh good! At least if people see the apple then they won’t think that the entire phone is an Early Learning Centre replica. It screams “there is good design inside me! You just have to look deeper! Beauty isn’t all skin deep you know!” Good bloody job really isn’t it?

Putting a sleek, flawless iPhone into the Kryto-case is like making Gisele routinely wear a suit made from egg cartons.

“We’re shooting Gisele for the cover tomorrow and we need to keep Chanel happy but she’s currently working with Dior, so…we have the bias-cut Dior drop-neck slip or we have the Chanel bikini styled with the snow boots.”

“Uhh, really? OK no, scrap those. Can you just go to fifth floor and ask if they’re still recycling the egg boxes? I’ll make them into a suit.”

“A…suit? We’re paying fifteen thousand dollars for a phone – I mean a model – and we’re going to hide her in an egg carton suit?”

“Yeah don’t worry, we can cut a hole out somewhere so that you still see how good her body is underneath.”

Don’t know where that semi-analogy was off to! Anyway you get the gist. I’m not impressed with these cases – even the apple ones look rubbish, although slightly less rubbish. To be quite honest I do wish I’d bought the silicon Apple one, which doesn’t have a Nippelback and is a nicer shade of pink. I think it was cheaper, to add insult to injury…

If you’re looking at these cases thinking I don’t actually think they look that bad then a) observe an unadulterated iPhone – isn’t it quite smooth and perfect and wonderful? – and b) you’re probably right but if I didn’t fully exaggerate all of my thoughts then I’d have nothing to write about.

Notes so that I don’t get sued: apparently Apple have made the new phone out of the strongest metal-strengthened glass known to the entire universe. The extra lenses are necessary for the super-duper image quality and both of the cases shown above are top-rated, high-performing cases that shouldn’t be mocked.