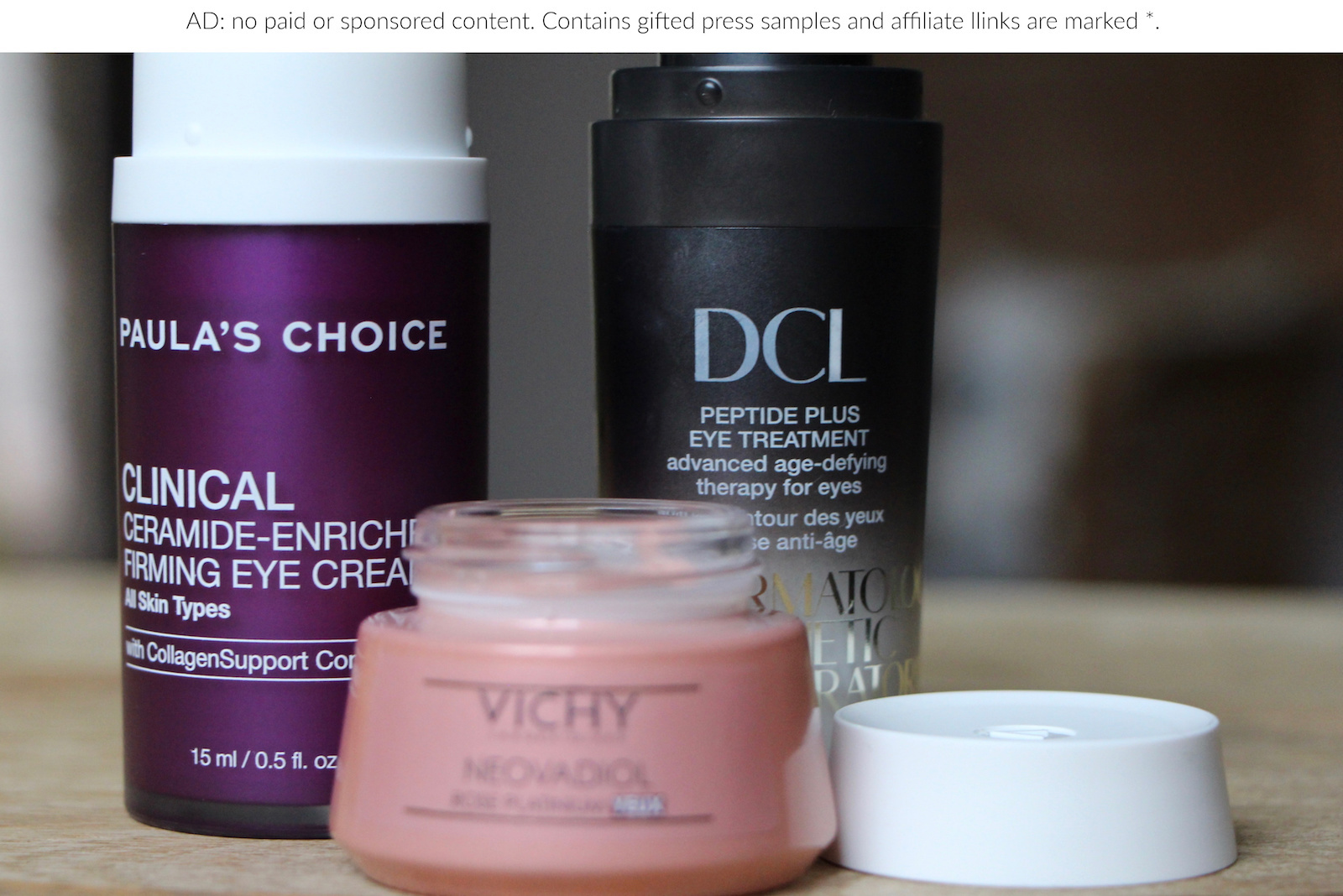 I’ve started a little series on Instagram that I hope to keep regularly adding posts to; it’s called 3 Best Beauty Buys, which isn’t the most inventive of feature names, but it’ll do what it says on the tin and that’s what counts! I’ve already done a quick IGTV feature on Maskne products (Maskne is the new, vaguely annoying term for blemishes and outbreaks that have been brought about by the wearing of a facemask) and you can watch that here, but now I’m prepping a video on the best firming eye creams and so I thought I’d take you along for the ride.

I always have to write myself an abundance of notes before I start filming something, otherwise I go off on crazy tangents, talking about parking woes and singing foxes and the complexities of British queueing etiquette. And it makes some sort of sense for me to write those research notes here on the website, so that you all get a handy post out of it, rather than scribbling them on the back of a council tax bill and chucking it all in the recycling afterwards…

And so here are three great firming eye creams that I’ve had noticeable results with. My usual eye cream, for reference, is the Kiehl’s Powerful Strength Line-Reducing Serum (find more details in posts here) but after a summer-long love affair with everything antioxidant and Vitamin-C-heavy, I’m turning my attention to the super-firmers.

Let’s go in with a sharp intake of breath and the priciest option – the DCL Peptide Plus Eye Treatment – which is £86 at Cult Beauty here*. DCL burst onto the UK scene a few years ago and the products are so good – really well-formulated and effective – but I haven’t heard that much noise about them since. This powerful eye cream is deeply hydrating but also focuses on helping to increase elasticity around the delicate eye area so that fine lines are smoothed. It mentions dark circles on the marketing material, but I don’t find that anything helps that much with dark circles if you have them severely – this is definitely one for firming and making everything just feel a bit more…robust. I gave it a very lengthy and intense trial last year but my review got pushed to the side when the world fell apart. So here: it’s a good ‘un – I’m on my second bottle.

My next “pick of the bunch” would be Paula’s Choice Clinical Ceramide-Enriched Firming Eye Cream, which is £43 here*. I didn’t realise until quite far down the road that this contained retinol  as well as a wheelbarrow-load of ceramides for strengthening delicate, crepey skin. This is the most advanced eye cream available from Paula’s Choice, which excites me; I feel as though their formulas are always really well-considered and offer solid, marketing-bollocks-free options for the crowd who want no-nonsense answers to their skincare complaints. Love the pump-action bottle (DCL’s is the same sort of packaging) and the rich texture of the cream. It feels instantly relieving if your skin is chronically dry around the eyes.

When it comes to Vichy’s Neovadiol Rose Platinum Eye Cream (online here*) I have to admit that I was entirely seduced by the packaging! I’ve really gone off pots of stuff because the cream gets under my nails and annoys me and it just feels less…clean…than tubes and bottles, but this teeny pink pot just felt so unbelievably retro.

As though I had been transported to the 60s and sauntered down to a Parisian pharmacie to pick up a cold cream and some velcro rollers for my hair but thrown un petit creme pour les yeux for good measure. It’s a total trinket of beauty treasure and the eye cream inside is equally as delicious. Rose pink – so nostalgic! – and really very rich and buttery so that it feels nourishing and comforting straight away. I’ve just seen that it targets the signs of ageing caused by the menopause but it seems just as appropriate for signs of ageing caused by the half term holiday. It’s also £18 rather than £27 at Escentual here* until the end of October.

Right, keep a lookout for the video on IGTV – I’m here if you use Instagram but you’re not already following!